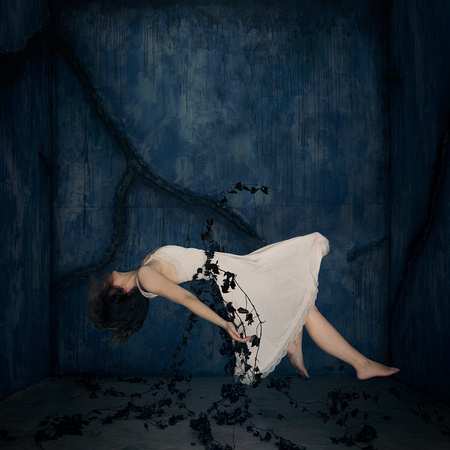 I have gone weeks, months even, feeling like I have my anxiety under control. Then I'll have bad days where it will all come back. Anxiety can leave you feeling trapped. Trapped between the fear I physically feel and the logic of knowing there's nothing to be afraid of. It's so frustrating knowing that I am stronger than my anxiety, but that not translating into how my body is reacting.

"Man, you really know how to get someone down
Everything was fine until you came around
I've been chasing after dreamers in the clouds
After all wasn't I the one who said
To keep your feet on the ground?
Man, you really brought me back down."

I have to admit now that I am nearing the end of sharing this series(one photo left) I'm starting to feel relieved. I thought creating these images was going to be the hard part, but opening up and writing about what I have/am going through has been exhausting. Social media is usually used to share the good stuff. It's been terrifying lifting this curtain and talking about my anxiety. I know that it's worth it though. The messages and comments I have received from those of you fighting the same battle have meant everything.