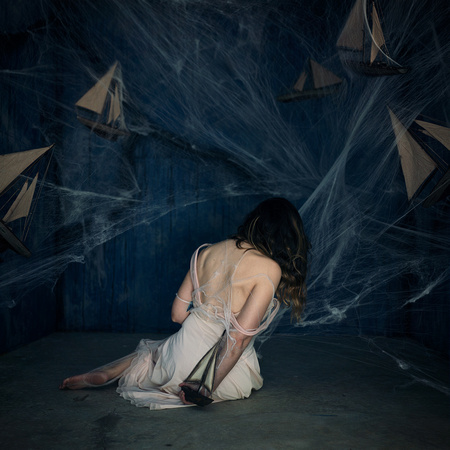 Anxiety creates so much unnecessary fear and doubt. It's caused me to hold myself back from pursuing so many different dreams of mine. It's made me feel like I need to keep my dreams small because I won't be able to achieve anything great. I really believed this for the longest time. When I started creating conceptual work I was terrified to share it with anyone. Over two years later my work has been in numerous galleries hanging next to so many talented artists. I don't say that to brag. I never thought anyone would be interested in my work or what I had to say.

For the longest time this fear and doubt caused me to feel like I would never fit in anywhere. The same year I began creating conceptual work I attended the Promoting Passion Convention hosted by Brooke Shaden. I was absolutely terrified. I had an anxiety attack just before getting on the plane. I was so worried about what everyone would think of me and that I was making a mistake by going. I was so wrong. This convention and the people who attend changed my life. I'm not saying that lightly...I mean really it changed my life. I went back home feeling connected to so many people through art and feeling like the work I was creating was important.

Had I let my anxiety take creating and sharing work from me I never would have seen these two dreams of mine become a reality. It wasn't easy...anxiety definitely doesn't make it easy. For those of you who deal with anxiety I hope you know how strong you are. I hope you know that despite how little anxiety can make you feel you can accomplish your dreams. And most importantly I hope you know you aren't alone.

I loved creating this image! I bought the fake cobweb around last Halloween and I have been dying to use it. It was so much fun to set this photo up. The clean up....not so much.