Anxiety Series- Noise in the Air 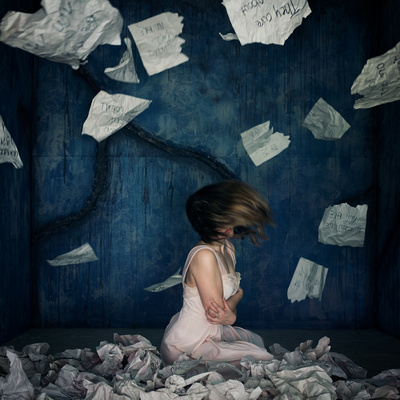 During and usually a good while after an anxiety attack my mind is filled with negative thoughts. All the work I have put in and positivity I have filled my mind with gets crumpled up and thrown to the side. At first it's easy to push negative thoughts away because I know it's only from my anxiety, but after awhile of things like "you aren't good enough" "you'll never beat this" "you aren't strong enough" it gets hard not to give in and believe them. This, for me, is the most exhausting thing about anxiety. Just when I think I have learned how to turn it off it finds it's way in again.

"These wars that I fight from within

I don't know where they end and I begin

I try, I try to calm them down

But these thoughts they keep spinning

This photo was not my original concept. Usually when I shoot for a photo I do a back up pose just in case my original idea doesn't turn out how I want it to. Up until the day before I released this series I had my original levitation photo (below) in the series. I wanted to like it because it was the first concept I drew up when I began working on this series. It also wasn't an easy concept for me to photograph. Much like jumping I am also not very graceful when trying to create levitation photos. I got many bruises from that shoot. I had to let all my attachments to it go and accept that it wasn't as strong as it could be. I'm much happier with how the back up photo turned out. 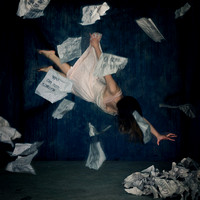 What things do you do to bring more positivity into your mind?